The Colburn Orchestra Went to Europe... and the Next Level - Classical KUSC Hit play below to listen to our extended Arts Alive feature on the Colburn School.

Big changes are happening at the Colburn School. Frank Gehry is currently designing them a new concert hall and theater space in downtown L.A., and the Colburn Orchestra just went on its first-ever tour abroad. The orchestra—which turned 15 this year and has produced musicians who are now with the L.A. Philharmonic, the Boston Symphony, and the London Philharmonic—was invited to perform at the prestigious Edinburgh International Festival, and they turned it into a mini-tour by also hopping over to Dublin.

“The school has really matured over the years, and as the reputation of the school continues to grow, we thought this was an opportune time,” said Sel Kardan, president of Colburn.

The concert program, which they’d been rehearsing for just two days at home and had a trial run at The Soraya in Northridge, was a mix of new and old: Nyx, the 2011 tone poem by Esa-Pekka Salonen, Samuel Barber’s Violin Concerto, the Symphonic Dances by Rachmaninoff… and for a crowd-pleasing encore, Leonard Bernstein’s Candide Overture.

At rehearsals in Edinburgh, the touring orchestra—a combination of current conservatory students and alumni, a collection of world-class musicians from all over the world—got a masterclass from their renowned tour conductor: Maestro Stéphane Denève. 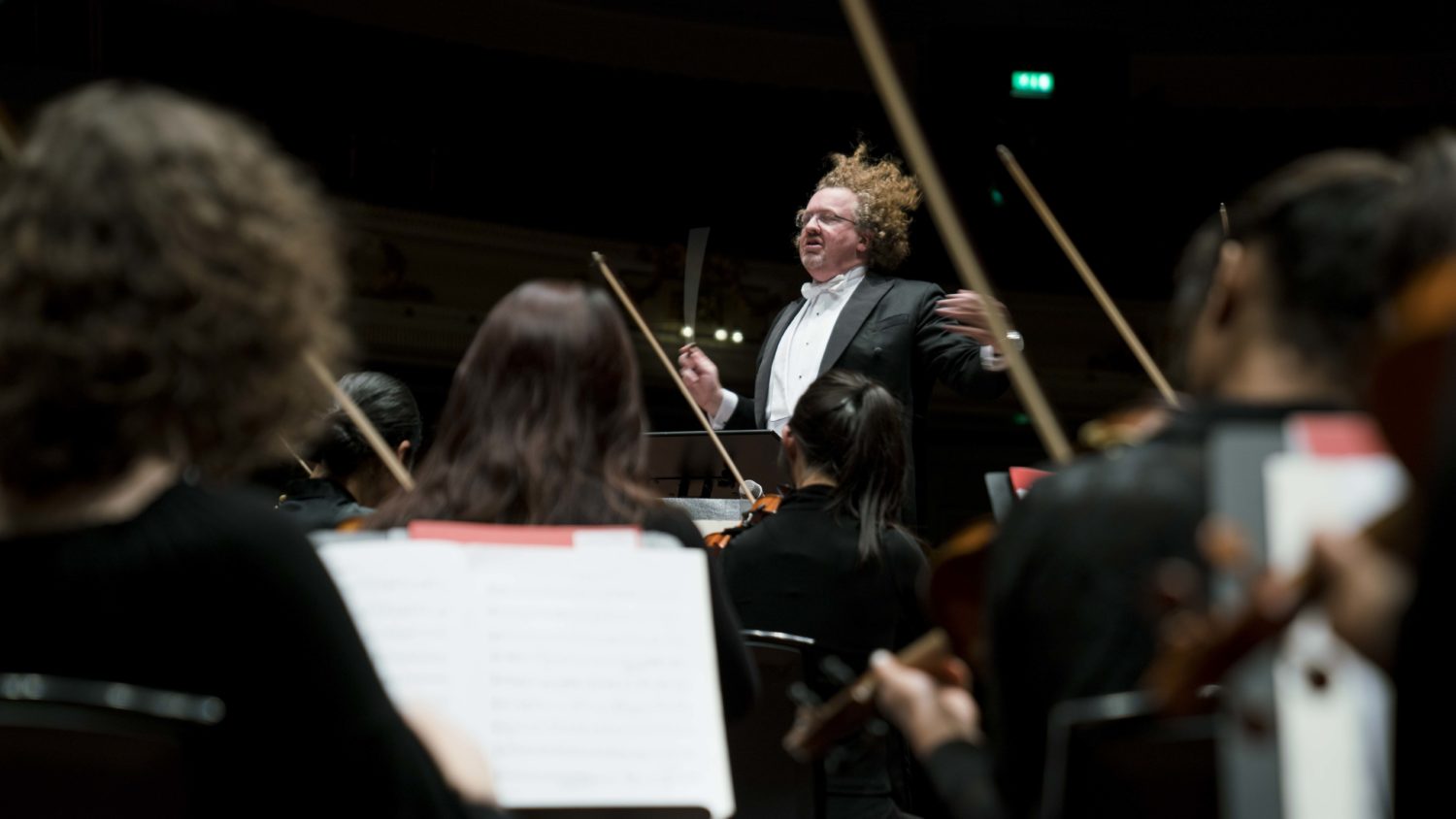 “These young musicians are so good that I’m not compromising and I’m not adapting my interpretation to them, because they really deliver at [such a] high professional level,” Denève said. “But maybe what is even added is that they are hungry to learn also something from it. So I feel that there is something very pure and very fresh into their acceptance of what I can propose. I have a feeling that I can shape it from the start, the way I dream it. So it’s extremely satisfying, because you have a bit the best of both worlds.”

Edinburgh was overflowing with humans while we were there because of the multiple festivals going on simultaneously, including the famous Fringe Festival. The streets were bustling with performances—jugglers, musicians, live statues, random singing mobs—and there were actors standing in the doorway of seemingly every church and building inviting you in to watch their show.

Finally came the big night at Usher Hall. The room was packed with folks eager to see what these young musicians had to offer. The response was rapturous, and Denève was visibly giddy. After the Rachmaninoff, he turned to the crowd and said, “What a ride! I feel young again.”

The next day they flew to Dublin, where I spoke to the maestro after a short rehearsal at the National Concert Hall.

“I don’t know exactly why, without years of playing together, without a kind of DNA, why they would already offer such a cohesive sound,” he said. “I wonder if it has to do with the place, actually, because there is something that is distinctively glamorous and warm and, for me, west coast—I mean, in the kind of poetic idea I have about the west coast. And that is really fascinating. So, do they develop together a certain idea of sound that, then when they play as an orchestra, it’s right away distinctive? I do not know. But they really exceeded my expectation about that, about the quality of the cohesion, the sound produced, and the feeling I’m really conducting a fully-formed orchestra.”

The other star on the bill was Simone Porter, who performed the Barber Violin Concerto. Porter’s a graduate from the Colburn Conservatory (and former member of the orchestra), who started attending the school when she was 12. She made her debut with Gustavo Dudamel and the L.A. Phil last year, and she’s definitely destined for a big career. “It’s both very nerve-wracking and very rewarding,” she said after rehearsal in Dublin. “I think playing for your colleagues has a special type of pressure, because I care about their opinions very much, and I have so much respect for their own artistry that, you know, you want yours to be worthy, basically. But, the truth is, onstage I can feel the support emanating from the orchestra, both just in the way we look at each other on stage, and of course the way play.”

To learn more about the Colburn Orchestra and all of the exciting things happening at the Colburn School, visit colburnschool.edu.