See This Year's Oscar-Winning Costumes from "Black Panther" at FIDM - Classical KUSC
Support the Music You Love
This stream only exists thanks to listener support. Consider making a gift of any amount to keep it coming. Now at FIDM, you can see the annual “Art of Motion Picture Costume Design Exhibition“. The exhibition features over 100 outstanding costume designs from more than 25 films released in 2018, including all 5 Academy Award Nominees and, of course, the Oscar-winning costumes from Black Panther. Admission is free and the exhibit runs now through April 12, 2019.

FIDM Spokesman Nick Verreos takes us on a tour of incredible Oscar-nominated costumes — from royal purples to Wakandan beads and Western wools.

Hit play below to listen to our Arts Alive feature with Nick Verreos. Mary Zophres on designing for The Ballad of Buster Scruggs:

I was struck by how rich the characters were in each of the stories and how each story was a specific genre within the genre of Westerns. It was a fantastic opportunity to do such specific characters whose costumes were allowed to tell so much of the story. Like Liam Neeson’s story is called Meal Ticket and it’s a very bleak, darker story. He barely has any lines at all, but his face says so much and his costume was meant to tell the story of how hard his life was and how difficult it was to make a living in those days. I did lots and lots of research for the film and a lot of it was the reading of diaries, journals and letters of people writing to their loved ones about how hard live was in the 1800s – like how the clothing felt on them on a hot day when they were more than likely wearing wool, and the lack of washing. I got embedded into the story and into the storytelling and that was really helpful. I had to dress a man who was completely covered in pans, I’ve never done anything like that before! Mary Zophres, Costume Designer for “The Ballad of Buster Scruggs”

Marvel got me started and, once I saw where we were going, I was able to infuse a lot of African culture into the costumes. We did some work that utilizes ancient African techniques in jewelry-making and bead-crafting. Some of the materials we crafted ourselves. We used real African beads, but then we had to mold them and make them stunt-friendly. We did a lot of our own printing, because I didn’t want to use too many fabrics from, like, the Dutch, because I like if we’re talking about a world that’s not appropriated then we can’t use the Dutch fabrics. I tried to use more wovens and mudcloths and things that I felt really could be traced back to ancient times in Africa. See more photos from the exhibition below. Costumes from “Mary Queen of Scots”, designed by Alexandra Byrne 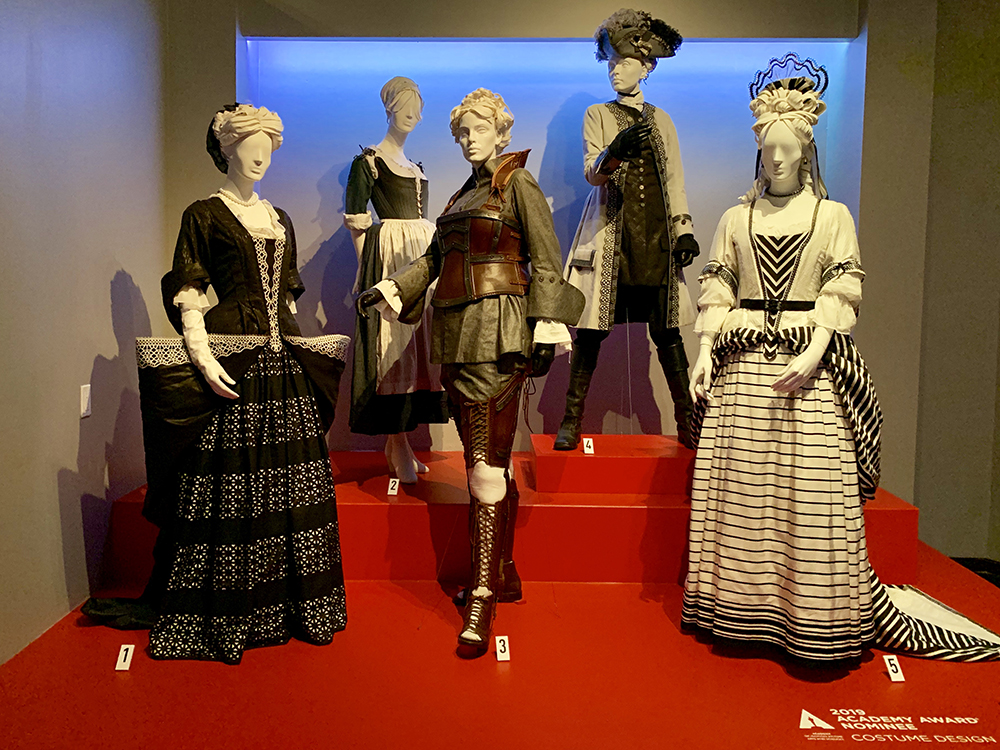 Costumes from “The Favourite”, designed by Sandy Powell