Hit play below to listen to our Arts Alive feature on Pacific Opera Project’s production of “The Magic Flute”.

Imagine this for a moment. The year is 1988. You are opening your brand-new Nintendo Entertainment System for the first time. You carefully insert the game cartridge and hear the opening strains of the “Ground Theme” from Super Mario Bros. Did you at any time think that this music or the famous melodies from Legend of Zelda would lend itself to Mozart?

Pacific Opera Project and their artistic director Josh Shaw have taken on the challenge of bringing Nintendo to the opera stage with their new production of Mozart’s The Magic Flute. I visited during a recent orchestra rehearsal to learn more about the production. When asked why Magic Flute and why Nintendo, Shaw said it felt like a natural fit. Friend, assistant director, and current Papageno/Mario Scott Levin suggested video games as they were coming up with new ideas for the often-performed Mozart classic. 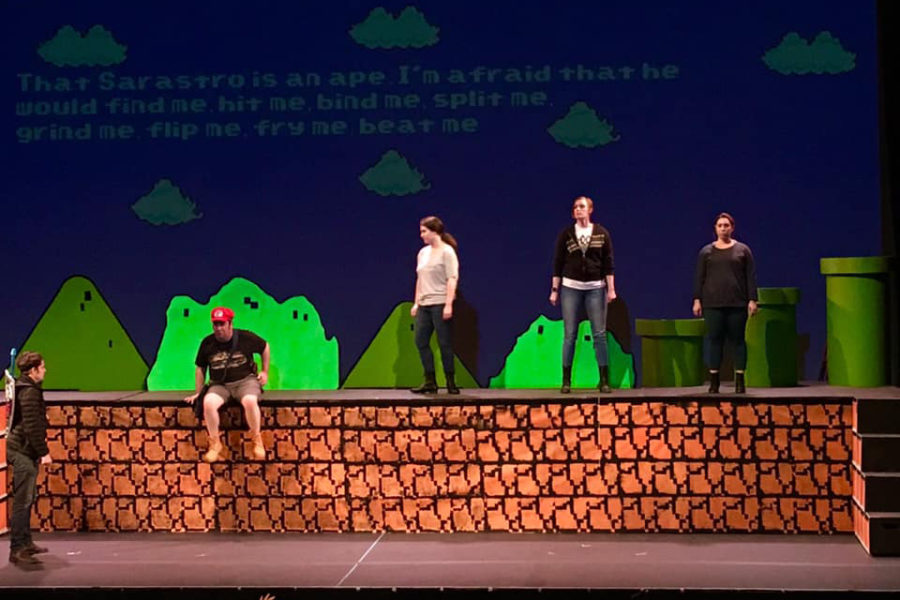 I asked Shaw how he chose who would be who in The Magic Flute, and he says it was easy. Link is a hero who goes on quests like Tamino, and his lady love Pamina would become Princess Zelda. In terms of Mario and bird-collector Papagano being one and the same, Shaw cites the physicality of singer Scott Levin, as well as Mario’s penchant for collecting coins, for that choice. The Three Ladies become the thievish warrior Gerudos of Hyrule, and the Three Spirits become Super Mario’s anthropomorphized mushroom people known as Toads. You can also see Donkey Kong, Wario, and Ganondorf – but I will leave those character choices as a surprise.

In addition to Super Mario Brothers and the Legend of Zelda, Shaw says you can expect many cameos from other Nintendo-based properties from the ’80s. Callbacks include Excite Bike, Mike Tyson’s Punch-Out, Kid Icarus, Duck Hunt, and Shaw’s favorite: Contra.

When asked about what the audience has to look forward to, Shaw replied two things. The set design and the singing. Which are both “amazing!” Pacific Opera Project’s The Magic Flute opens March 2nd at the El Portal Theater in North Hollywood and runs for five performances between this weekend and next. The production is extremely family friendly and will be presented in English with supertitles featuring a brand-new libretto by Shaw and Levin. In addition, March 8’s performance will include a costume contest prior to the performance as well as an opportunity to win tickets to a real-life Mario Kart race. Tickets are available for all performances at pacificoperaproject.com.