How Rachael Worby is Mapping America, Musically - Classical KUSC
Support the Music You Love
This stream only exists thanks to listener support. Consider making a gift of any amount to keep it coming. 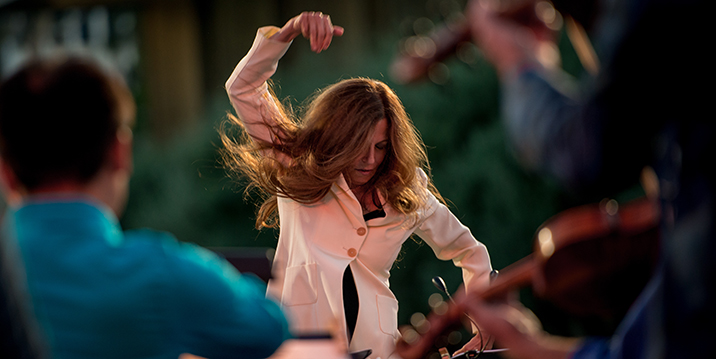 The performing arts and the out-of-doors are as much a summertime tradition in Southern California as looking for parking at the beach. Shakespeare is in all the parks and there are numerous Bowls in places much farther-flung than just Hollywood.

One of the most interesting and innovative outdoor concert series has a new home: MUSE/IQUE has moved to the meticulously manicured grounds of the Huntington Library, Art Collections, and Botanical Gardens. MUSE/IQUE was founded in 2011 by conductor Rachael Worby. She had been the music director of the Pasadena Pops and, in her words, got off “the conducting treadmill” and decided to chart her own course.

In a recent conversation at the KUSC studios, Worby told me, whatever she was going to do next, she wanted it to be something special for the audience.

For the summer series at The Huntington, Worby said she wanted to make MUSE/IQUE’s residence there more than just a quick parachute onto the grounds for some concerts shortly followed by a disappearing act. She wanted a true artistic partnership between the two organizations.

The three concerts this summer reference the extensive map archives at The Huntington.

“We decided to think about mapping America, musically. We were thinking about maps and how some boundaries—lines that are drawn—keep us safe. Other boundary lines that are drawn keep us separated. Maps have taken us places and maps have prevented us from going places. Maps have allowed people to come to us and maps have kept people away from us. The profound way that we now look at maps, even just on our phones, almost doesn’t allow us to understand how expansive a nation can be. How expansive our nation can be, especially if we map it musically. Because music doesn’t know any boundaries. Not just that it’s a universal language, but it simply doesn’t know any boundaries.”

The first concert on the series is a celebration of Leonard Bernstein, featuring Kitty McNamee Dancers and DJ EZ Mike among others. The second concert is a big Latinx dance party, starring Ballet Hispánico. The finale is a U.S. road trip with dancers from American Ballet Theatre and music from Duke Ellington to Sam Cooke to The Chairman of the Board himself, Frank Sinatra. Find out more at muse-ique.com.