A Pioneering Conductor Takes the Podium in LA - Classical KUSC
Support the Music You Love
This stream only exists thanks to listener support. Consider making a gift of any amount to keep it coming. 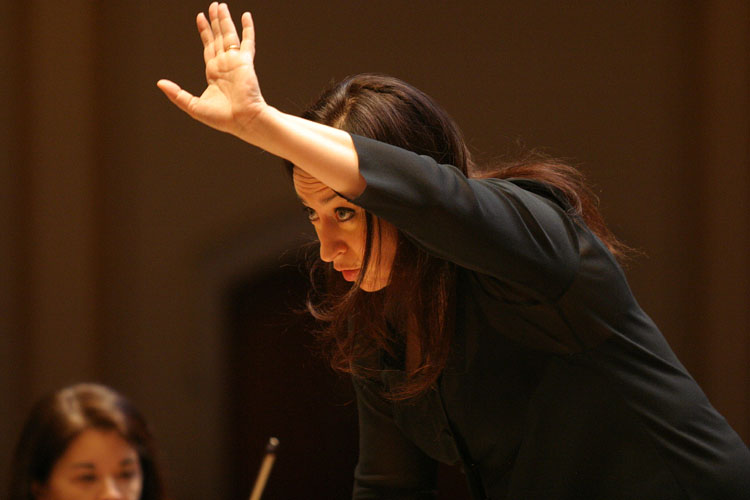 Simone Young’s biggest claim to fame is that she was the first woman to conduct the Vienna Philharmonic. That was a glass ceiling she shattered in 1993—four years before that venerable-but-problematic ensemble voted to finally allow female musicians. The Australian-born, UK-based conductor is happy to talk about that historic moment but wants you to know her career is about service to the music she conducts, not the trails she blazes.

She maked her debut as a guest conductor with the LA Phil February 1-3, 2019. Simone Young joined KUSC’s Brian Lauritzen at Walt Disney Concert Hall to discuss her upcoming performances and storied career. Listen to the full interview or read some highlights below.


On working with fellow Australian Andrew Bain, principal horn of the LA Phil and one of the soloists on this weekend’s concerts: “I actually gave Andrew his first job at Opera Australia! [LAUGHS] We met when he was in Vienna and he came to Australia to play when I was in charge of Opera Australia. … There’s been a group formed now called the AWO, the Australian World Orchestra, which Andrew plays in occasionally—it’s sort of like the best of the Australians from around the world get together to play for a week or two and I’ve done a few of their concerts and so has Andrew. It’s fun. How crazy is that! Two Australians in LA.”

On her historic debut with the Vienna Philharmonic: “I was standing outside the pit of the Vienna State Opera about to conduct Puccini’s La bohème, with a relatively unknown (at that time) Romanian soprano named Angela Gheorghiu, who was even younger than me. So, I’m standing outside the pit and I’m thinking, ‘Okay, what’s the worst that could happen? This could be the most embarrassing two hours of your life. They could hate you. They could work against you from the start. Or, it could be the beginning of a fabulous relationship that’s going to continue for 25 years or more. Either way, you’re still going to be in the history books as the first woman who conducted here. So, how bad is that? Just get in there and do the job.’ That was kind of the only moment when it was an issue for me. And, I’ve been conducting there ever since.”

On conducting “that music from 2001: A Space Odyssey” aka Richard Strauss’ tone poem Also Sprach Zarathustra: “It’s certainly not something you can ignore that the opening is so well-known—and very well-known in a specific interpretation: [Herbert von] Karajan and the Vienna Phil. If you go back and listen to some other recordings—Fritz Reiner, [Rudolph] Kempe from Dresden, or Strauss himself in the very famous early recording he made of it—all of those are completely different interpretations. So, as a performer, you have to make a very conscious decision that if you are going to differ from the way Karajan does it, the way everybody knows, that you have very concrete grounds for making those decisions. What usually bowls people over is how breathtakingly beautiful the rest of it is and how joyous the section shortly before the end is. That usually takes people’s breath away. … So, yes, you’re dealing with expectations, but that’s just part and parcel of where we live. I mean, I can’t conduct the overture to The Barber of Seville without thinking about Bugs Bunny! [LAUGHS] And that’s okay! These are contemporary references that an audience can use to find a connection with the music.”

You can find out more about Simone Young’s upcoming performances with the LA Phil at laphil.com.