Vox Femina Reaches Toward the Future - Classical KUSC
Support the Music You Love
This stream only exists thanks to listener support. Consider making a gift of any amount to keep it coming. Hit play below to listen to our Arts Alive feature on Vox Femina.

On a warm spring morning, I stood on the steps of First Congregational Church of Los Angeles, watching as hundreds of school children arrived from all over the region. Buses from South Pasadena, Downtown Los Angeles, Duarte, and areas beyond. There were there for one reason – to take in a concert by the all-treble choir known as Vox Femina.

Vox was presenting their very first community outreach event, entitled Concert for Youth, with the desire to educate and encourage the choral singers of the future – regardless of age, gender, or skill level. I watched over the course of an hour as hundreds of school kids clapped, cheered, and danced in their seats. From my perspective, the Concert for Youth was a complete success. 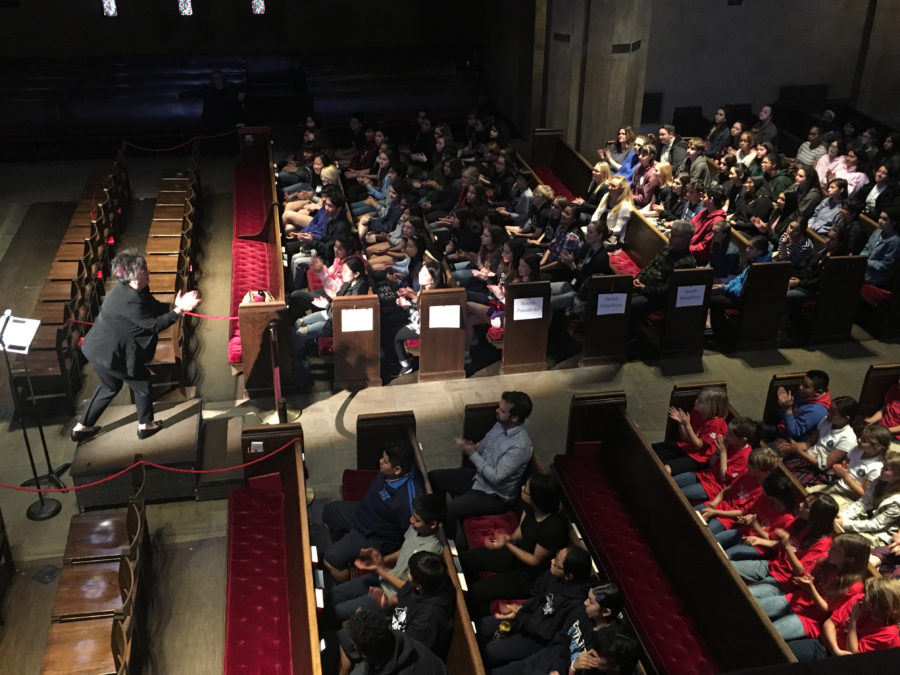 Vox Femina occupies a unique place in the Los Angeles choral scene in that they are solely comprised of treble voices, sopranos and altos, unlike the traditional model of four-part voices such as found within most choirs. It is also their dedication to their musical interpretation and to each other that set them apart.

Their motto is this “Through music, we aim to create a world that affirms the worth and dignity of every person.” Or in the words of American composer Zachary J. Moore’s “Always Keep This Close,” “No notes are as connected as the souls who sing them. No soul is happier than when surrounded by her sisters. We are one.”

Vox Femina will be rounding out their season this coming June with a program paying tribute to the LGBTQ community in partnership with the Trans Chorus of Los Angeles. If you are interested in becoming part of Vox’s community, auditions will be held later this summer for their next season. You can learn more at voxfemina.org.