One Afternoon in 1943 - Classical KUSC
Support the Music You Love
This stream only exists thanks to listener support. Consider making a gift of any amount to keep it coming. In this Bernstein centennial year, we’ve looked back to that November afternoon in 1943 when the 25-year-old assistant conductor of the New York Philharmonic substituted, on a few hours notice, for the ailing Bruno Walter. The Carnegie Hall concert was broadcast nationally on radio. Bernstein’s performance received critical acclaim and put him on the front page of the New York Times. There was no time for a rehearsal, only a brief conversation with Bruno Walter, who was in bed with the flu. Bernstein was especially concerned about the piece that opened the concert, Schumann’s Manfred Overture:

“The thing that was obsessing me, possessing me, was the opening of the Schumann overture, which is very tricky because it starts with a rest – the downbeat is a rest. If they don’t come in together, the whole concert is sunk. I mean, I can’t once go ‘bop, bop, bop,’ and make sure they can do it. So, this was like a nightmare. I had to go on and do, untried, this thing of such difficulty.”

Bernstein succeeded. You can hear the broadcast below:

And you can read more of Bernstein’s recollection of that day here. 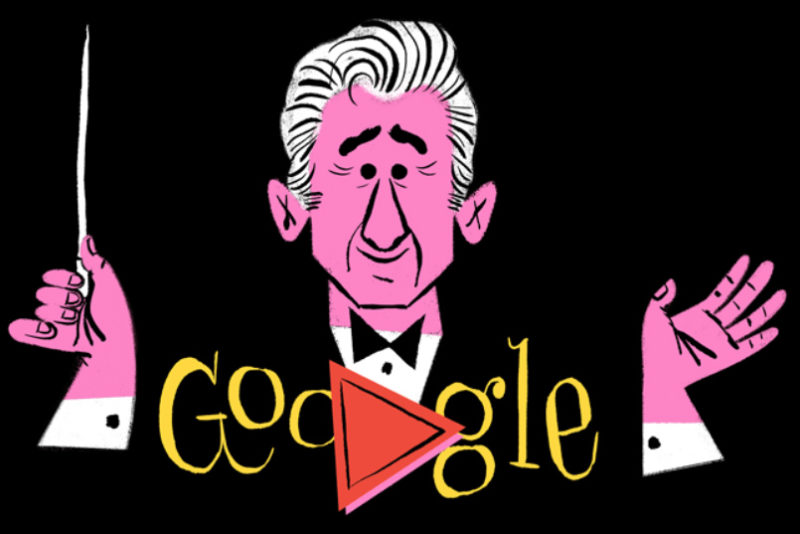 A Google Doodle for Lenny America’s Classical Rock Star: Where to Celebrate Leonard Bernstein at 100