Celebrating 40 Years of Dianne Nicolini on the Air – Classical KUSC Not everyone can say they’ve been doing their dream job for 40 years. Even fewer can say they accidentally fell into the gig of a lifetime. But Dianne Nicolini is one of the lucky ones who can claim both.

Four decades after she got started, Dianne is now a mainstay of classical radio, connecting each day to thousands of listeners all across California over the air and streamers all over the world. Though that’s not the path she imagined when on a whim she answered an ad for Kansas City’s Classic KXTR in 1980. Newly married, she took a part-time shift, working overnights to help pay the bills during grad school. Dianne with her husband, Jim, and newborn son, Tommy

“I mean, it attracted me because I was a theater major. I thought it would be a kick to be on the radio. And I also had done my junior year of college in France, so I felt very comfortable with pronouncing things in French. I just thought it would be kind of a fun thing. Why not? And it did say no experience necessary!” Dianne said. “I really, really came at it from knowing nothing.”

Though, that’s not the Dianne Nicolini listeners know today. She’s come to be someone listeners appreciate as a friend, trusting her to share stories and insights, adding depth and beauty to the music they hear on the radio. But if you ask Dianne, the person you know and count on grew directly out of her self-taught roots at KXTR.

Sometimes that meant flipping through LPs in the studio, scouring for nuggets in liner notes. Other times, it meant deep dives into trusted tomes, researching the history and connections between works, and even coaching on proper pronunciations from a professor at a local music conservatory.

“I am very honest about the fact that I’m not a musicologist,” Dianne said. “Over time, I realized that’s OK, because there are other people that could do that… For me, I try to think, ‘Well, what would I want to know about this piece to enhance my listening?’”

Eventually, after her husband graduated from medical school in Kansas City, they moved back to California, working at KUSC for two weeks before a full-time position opened up at KKHI in San Francisco. When KKHI changed formats in 1994, Dianne moved over to KDFC — becoming the “first live human on the radio station,” after years of KDFC being a fully-automated station — and the rest is history. Dianne and Bill at San Francisco Opera in the Park

Over the years, one of the surprise joys of working in classical radio has been the opportunity to constantly build on her knowledge.

“I always learn new things about history, art, architecture — because it all ties together to classical music. A lot of it is old, a lot of it has a connection to whatever was going on at that moment in time,” Dianne says. “I like to just bring it down to real life and make it relatable.”

Still, that personable radio presence is something she considers hard-won. She looks back on the mid-‘90s, when KDFC President Bill Lueth became her boss, as the moment she really found her rhythm on the airwaves.

“It took me a while, you know, it wasn’t overnight — to just relax and trust myself on the air. But that was a huge deal,” Dianne said. “Bill also told me: ‘You know what? You’re going to like your job better when you can just be you.’ And he was so right!” 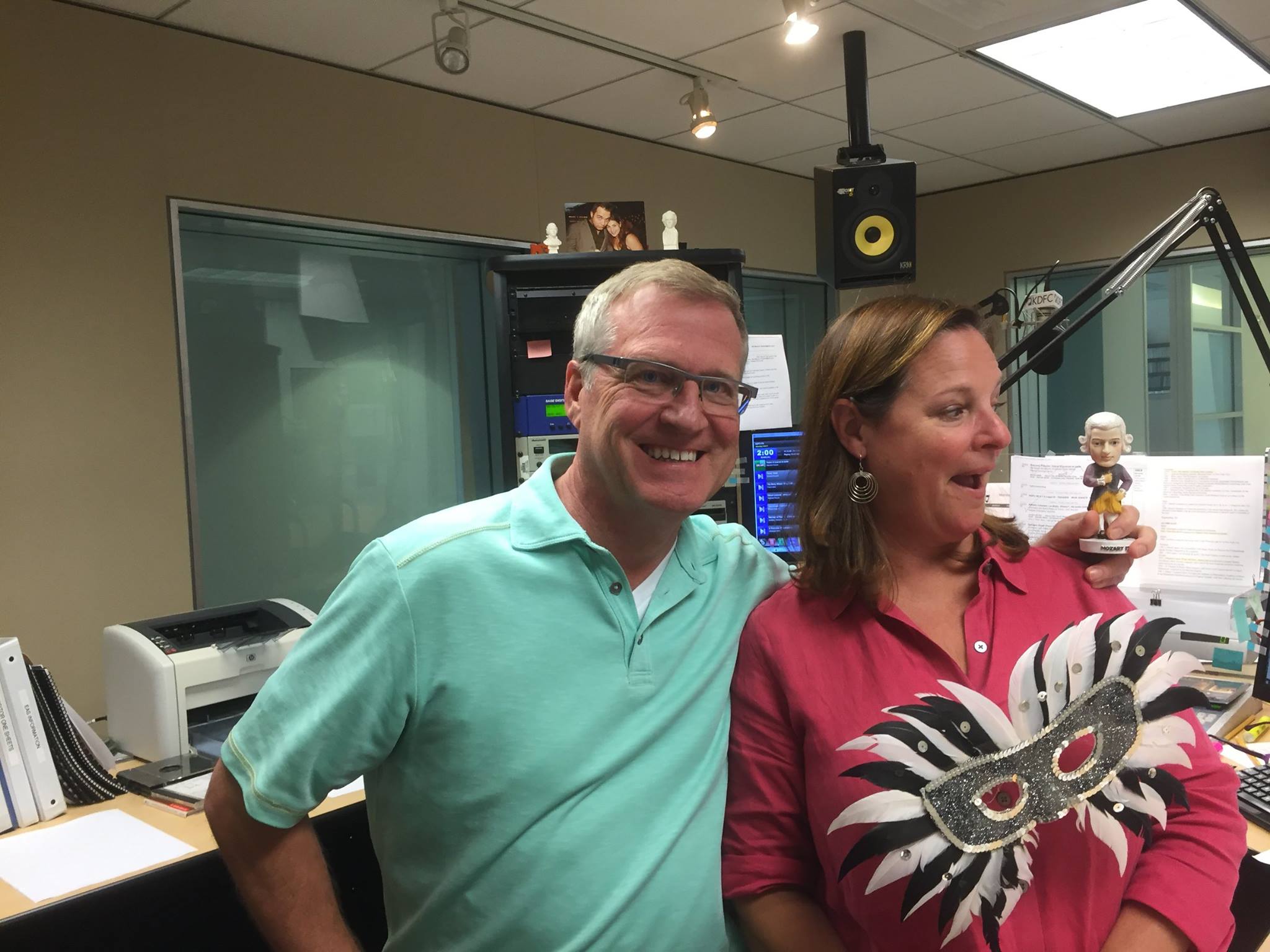 Bill remembers that moment a little differently. Though he concedes that it took some time for Dianne to get comfortable, in his eyes, Dianne has always been one of the best in all of radio.

“Dianne is a smart, fun, charming, empathetic person in real life. She’s so much more interesting than just that great voice,” Bill said. “KDFC and KUSC are like a big family, and Dianne is a huge part of why that is. She likes to have fun, she steps in whenever needed for the sake of the greater good.” 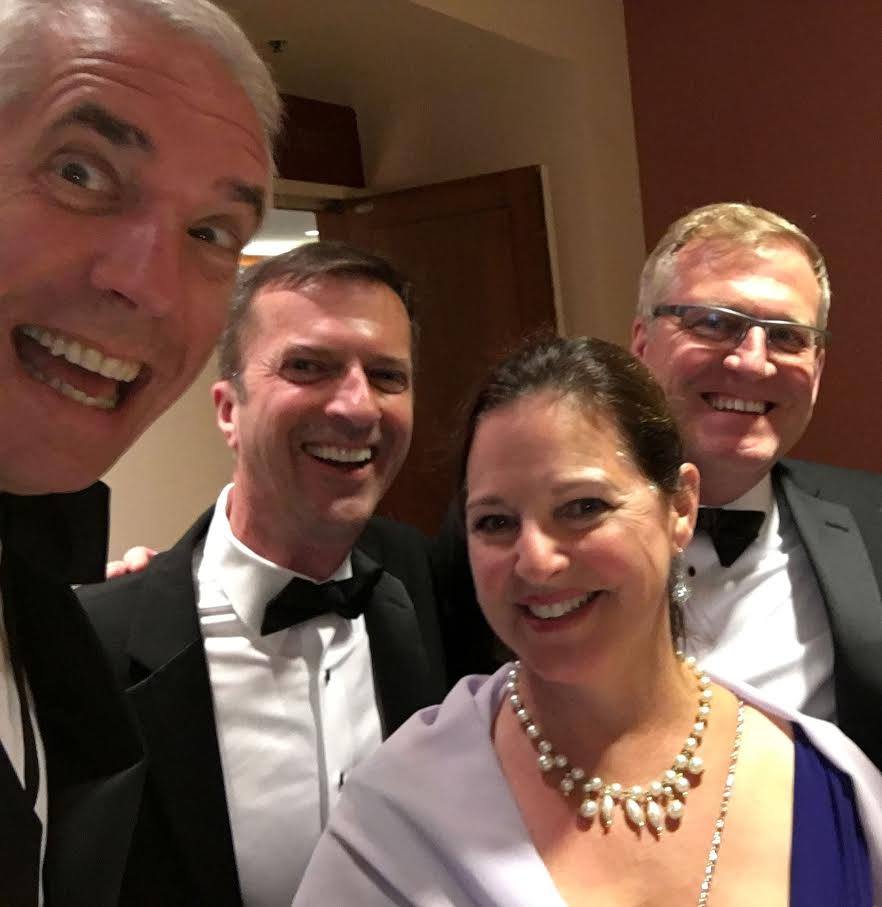 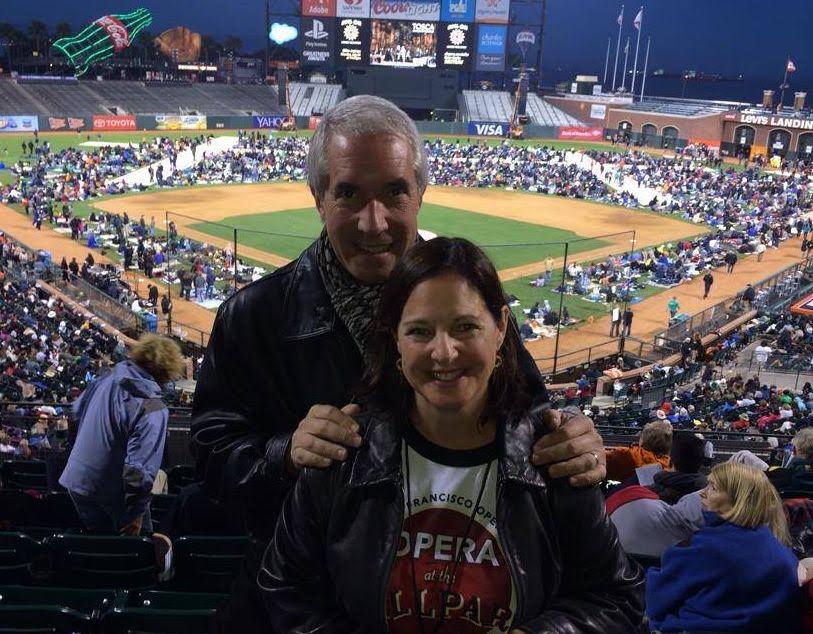 Dianne and Hoyt hosting San Francisco Opera in the Ballpark Even in the past few challenging months, Dianne’s sense of camaraderie with her listeners hasn’t wavered. As one listener, Joyce, put it: “I listen to Dianne Nicolini whenever I can. Thank you all for the beautiful music and uplifting words. You are always there for us, and we are grateful.”

These days Dianne can’t imagine doing anything else — as much as she loved theater, she never loved the audition process. Her job now gives her “a nice little showbiz feeling,” even when she’s introducing the music from a quiet corner of her daughter’s former bedroom during the pandemic. Dianne recording her shows from her daughter’s former bedroom

This April, she was supposed to mark her big anniversary in the biz with a trip to Italy. While it was canceled due to the pandemic, she’s continuing to bring classical music to hundreds of thousands of listeners, with her usual grace and wit. And through it all, she’s still thrilled to get to do what she does, as long as anyone will let her. “I never seriously considered doing anything else. Because I realized that this was just a fabulous job. I just listen to this great music,” Dianne said. “The biggest compliment I ever receive is when people say, ‘I feel like you are a friend of mine.’ That’s why I do what I do; I mean, that just makes it. You know, that’s why I continue to work.”