While we’re all sheltering in place, we’re suddenly faced with a lot of time on our hands — a lot of time. What better way to fill some of that time—-when you’re not listening to KUSC, of course–than with a film festival, one catered to your specific interests and tastes?

Below you’ll find recommendations for films that prominently feature classical music, either as an integral aspect of the plot, or during memorable moments in the score. The movies range from a kooky night at the opera all the way to the farthest reaches of outer space. In some cases, the music propels the plot forward; in others, it’s an important backdrop for a pivotal scene. Either way, let your love of classical music guide your way through this DIY, at-home film festival.

I asked KUSC’s Gail Eichenthal and Jeffrey Freymann to help me compile the list. Did we miss a favorite of yours? Let us know in the comments or on social, so others can lengthen their film festival.

It’s hard to quantify just how crucial classical music is to the telling of Stanley Kubrick’s classic 2001: A Space Odyssey. The opening — set to Richard Strauss’ Also sprach Zarathustra — has become one of the most iconic moments in cinema, the tune now synonymous with the vast atmosphere of outer space. And 2001 doesn’t stop there, with more tracks from Strauss, Aram Khachaturian, and György Ligeti. Hear the orchestra lilt and build, ominous and bright in equal measure. They’re the tether to Earth and humanity as 2001 gets more and more cosmic.

Just because your kids are at home with you doesn’t mean your (or their) classical music appreciation has to stop. In addition to listening to KUSC with the little ones, you can introduce them to the fanciful stories in Fantasia. The eight individual compositions that make up this animated compilation provide something for every taste — and probably for every kid. It’s a great way for children to start appreciating not just classical music but the stories being told by the instruments during a piece. Whether it’s through dinosaurs, centaurs, ostrich ballerinas, or Mickey himself, Fantasia is a pivotal film for classical music lovers and their children.

The world of Alien is cold, harsh, and cruel; this is monster sci-fi, not for the faint of heart. So, it makes sense that Alien uses classical music not unlike how the rest of us are using it now: a way to seek sanctuary during a somewhat claustrophobic existence. Mozart’s Eine Kleine Nachtmusik is played as a character finds brief refuge from the madness of space. It’s a light and sprightly oasis — before the titular Alien brings the eerie back to the soundtrack.

Yes, it was remade in 1984 with Dudley Moore, but the earlier film is funnier. It’s a Preston Sturges classic, with hair-trigger comic timing and an impeccable cast. Rex Harrison exudes haughty self-importance as orchestral conductor Sir Alfred de Carter. Linda Darnell plays his glamorous wife Daphne, whom he suspects is seeing another man. One night during a concert, Sir Alfred plots three different possible revenge scenarios, each matching the mood of the work he’s conducting at that moment. Extended stretches of Rossini, Wagner, and Tchaikovsky.

Available to rent on YouTube, iTunes, ReelGood, and Amazon.

An international thriller by Alfred Hitchcock starring Jimmy Stewart and Doris Day as a couple who get caught up with their young son in an assassination plot while on holiday in Morocco. It would be a true crime to give away the significance of a certain cymbals crash in a scene at London’s Royal Albert Hall during a performance of the Storm Clouds Cantata by British composer Arthur Benjamin. The on-camera conductor of that performance is Bernard Herrmann, who wrote the score. The Cantata was a carry-over from Hitchcock’s 1934 version of the movie, which was scored by Benjamin. Hitchcock invited Herrmann to craft his own piece for the remake; Herrmann refused, saying the original was perfect.

Available on Netflix, Amazon, and Hulu.

Oskar Werner stars as a renowned conductor attracted to a young reporter (Barbara Ferris) to whom he gives an overly candid interview, which creates plenty of dissonance at the orchestra. During the “interlude” in his career that follows, the conductor, who is married, becomes involved with the reporter. Angst ensues. This film is also a remake. There were two previous versions, both called Intermezzo, and both starring a very young Ingrid Bergman. (The original was in Swedish; the remake was Bergman’s Hollywood debut and co-starred Leslie Howard. So it is also well worth seeing.) For us Oskar Werner groupies, though, Interlude is a must. Plus, the supporting cast! John Cleese, Donald Sutherland, and Derek Jacobi, all at the beginning of their film careers, all in small but vivid roles.

Available to rent on Amazon.

This is the first film of the Three Colors trilogy by Polish director Krzysztof Kieślowski. Juliette Binoche plays Julie, whose husband and daughter have died in an automobile accident which she survived. He was a composer, commissioned to write a major work for choir and orchestra in celebration of European unity at the end of the Cold War. As she comes to terms with his death and learns secrets from his life, she – also a talented composer – has the responsibility of preserving his musical legacy. It’s a memorably beautiful looking and sounding film, with some of the best depictions of the composing process in film history. As handwritten notes on the page go past, we hear them “performed” in the mind of the composer – and as orchestration suggestions are made, we immediately hear them. This scene is also intercut and used in the trailer. The composer for the entire trilogy, Zbigniew Preisner, also throws in a layer of misdirection – a (fictional) 18th Century composer named Van Den Budenmayer, whose body of work influences the composers within this film. Van Den Budenmayer is also referenced (as though a real composer) in the collaboration of Kieślowski and Preisner in The Double Life of Veronique from 2 years earlier.

Available to rent on Amazon or iTunes. Streaming on the Criterion Channel.

The Marx Brothers’ antics combine with some operatic singing as they travel to America from Italy with a coloratura soprano (Kitty Carlisle) and the tenor from the chorus who loves her (Allan Jones). It’s highlighted by the famous ‘Stateroom Scene’, in which more and more people on the boat descend upon the already cramped quarters of Otis B. Driftwood (Groucho).

Their adventure – which includes Groucho’s run-ins with straight-laced Margaret Dumont, and a trio of imposter “famous aviators” – finally leads them to a performance of Verdi’s Il Trovatore, with the young lovers on stage, and Groucho selling peanuts and crackerjacks as a ball game breaks out in the orchestra pit.

Directed by Jean-Jacques Beineix, Diva is a stylish thriller about a young man who is caught up in the criminal world after a cassette of evidence is secretly placed in his delivery bag. He’s an avid fan of a famed soprano who has never allowed any studio or concert recordings to be made. He’s secretly able to tape a concert with a professional-quality Nagra recorder hidden in that same bag, and both recordings are relentlessly sought and fought after. Based on the novel by the French author Delacorta (a pseudonym for Daniel Robert Odier), the film made the aria Ebben! Ne andrò lontana from Catalani’s opera La Wally popular again. The film stars Wilhelmenia Wiggins Fernandez as the soprano Cynthia Hawkins, and Frédéric Andréi as Jules. Its memorable chase scene takes a moped down into the Paris Metro, which Roger Ebert compared to the chases in Bullitt, The French Connection, and Raiders of the Lost Ark.

Koyaanisqatsi is a Hopi word for “crazy life” or “life out of balance”. With a score by Philip Glass, this Godfrey Reggio film uses arresting cinematography with slow slow-motion and accelerated scenes to show the clash between nature and human industrial civilization. There’s footage of highway traffic, sped up until the brake lights of cars look like blood traveling through the circulatory system. Clouds pour across a desert sky, as though riding on a river’s current. A crowd of city pedestrians, captured in slow motion, shows individuality and desperation amid a busy urban landscape. At high speeds, we are propelled through familiar daily life with the accelerator floored. At a time when many are getting used to different routines at different paces, this beautiful film gives everyone a chance to watch, breathe, and maybe catch up.

Available to rent on Amazon Prime, iTunes, on Vudu. 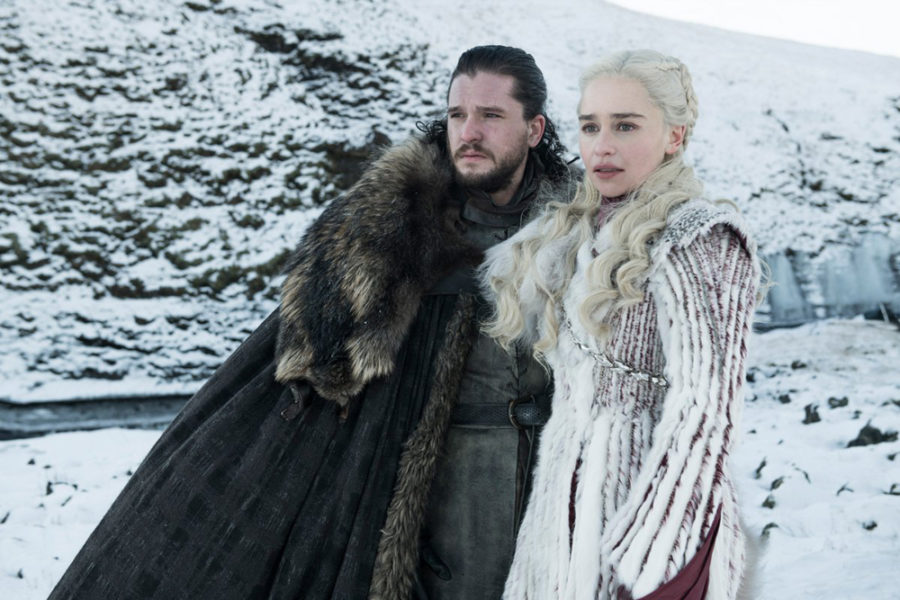 Game of Thrones: Our 13 Favorite Covers